Summers coming and with that so are the Insects, This blog is about identification differences between wasps &  Bees, ( as remember people Bees are PROTECTED in Ireland ), and who to contact . 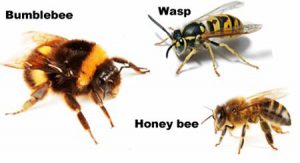 If you have a wasps nest then you should call a pest control company or myself, who will come and safely treat and remove the nest whenever possible.